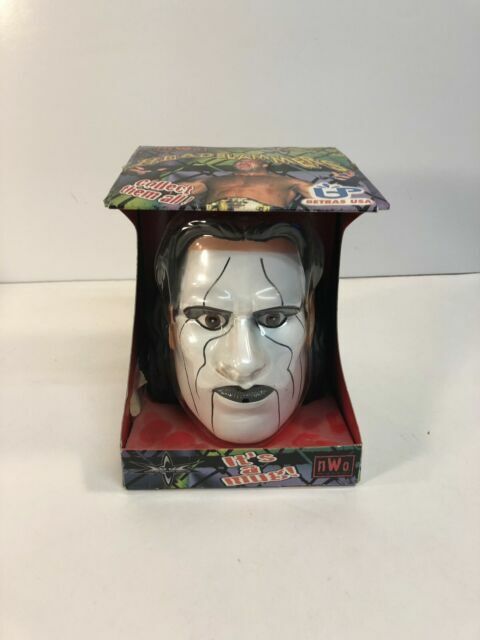 Sting is perhaps one of the most beloved pro wrestlers in the history of the genre and is a member of the WWE Hall of Fame. He wrestled several matches against other well-known performers, such as Hulk Hogan and Ric Flair, during his time in the WCW and TNA. Whether you were a fan of the "surfer" Sting or the "crow" Sting, there are items for any buyer to show off with pride.

What types of Sting T-shirts are available?

There are a wide variety of Sting T-shirts representing the various gimmicks that Sting portrayed during his career in WCW. Most of the shirts available are images of Stings face covered with either white or red face paint. The white paint is during his original run as "Crow" Sting while he wore the red paint while in the NWO Wolfpac faction. T-shirts are also available that feature black scorpions on a white background. The scorpion was widely associated with the performer while in the WCW and TNA, and his finishing move was called the "Scorpion Death Lock."

Are Sting posters or pictures available?

Sting posters featuring action shots from WCW events can make a great addition to a fans collection. There are a number of different poses and costumes that you can find that feature Sting. In one picture, Sting shakes Hulk Hogans hand at Superbrawl. Another features a picture of Sting in American flag face paint to promote a WCW Great American Bash match against Ric Flair. A promotional poster from the 1997 Starrcade match between Sting and Hulk Hogan features Sting in his white and black face paint.

What awards featuring Sting are available?

Sting won multiple World Heavyweight wrestling championships during his career in the WCW and TNA. A gold WCW champion replica belt is available with the wrestlers name written in big, bold font across the front. There is also a replica WCW/WWE championship belt that has been signed by every person to ever hold it in both the WCW and WWE.

What WWE Sting memorabilia can you find?

Sting has appeared in both Survivor Series and Wrestlemania. He also had a match for the WWE title while wrestling for the company. His followers can purchase replica Sting masks made of hard plastic for a snug fit. WWE Sting plastic and plush action figures are also on the market, and they can make a great gift for children or others who have followed his career. Chairs given to those who watched Sting perform at Wrestlemania are also up for sale, and they feature his face along with other superstars on the seat.