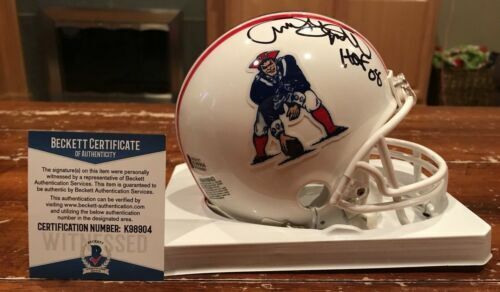 In 1959, the Boston Patriots became a member of the American Football League. Ten years later, they received an invitation into the National Football League. New England has been the model franchise in football, and their stars are memorialized in autographed collectibles of all kinds.

How successful have the New England Patriots been?

For a long while, the Patriots struggled to compete. They only won three total football playoff games between 1970 and 1995. The turn of the century changed things though, as the Patriots became the winningest team in the sport. The New England Patriots would go on to make eight Super Bowls, winning five, in the span of 17 years.

Which players from the heights of Patriots success autographed memorabilia?

This latest generation of football players has autographed a ton of items, encapsulating the core of the roster that dominated the league. Quarterback Tom Brady, who is a three-time league MVP and 13-time Pro Bowler, is a prominent autograph. Teammates of his have also signed items. These include tight end Rob Gronkowski, wide receivers Julian Edelman and Danny Amendola, kicker Stephen Gostkowski, and Super Bowl hero Malcolm Butler.

Players from earlier in the title run for New England also signed memorabilia. Drew Bledsoe was the successful quarterback who lost his job to Brady after suffering an injury. Tedy Bruschi and Vince Wilfork anchored the title-winning defense.

There are even a few older Patriots from past generations who have autographed items. John Hannah is an offensive guard who made the Pro Football Hall of Fame and had his jersey number retired by the franchise.

What type of collectibles have been autographed by Patriots?

Replica or authentic jerseys are a big signing draw. Many players have autographed their jerseys. Bradys number 12, Gronkowskis number 87, Bruschis number 54, and Edelmans number 11 are just some of the options.

Many other items receive signage. Helmets — either real size or toy versions — footballs, hats, magazine covers, plaques, and old programs are just some examples. Magazines and programs are generally considered interesting because besides capturing the autograph in question, they also represent a specific time in history. As for plaques, these can be a combination of collectibles that are framed for artistic purposes. Photographs, cards, posters, and covers may be matted and framed.

Content provided for informational purposes only. eBay is not affiliated with or endorsed by National Football League or the New England Patriots.